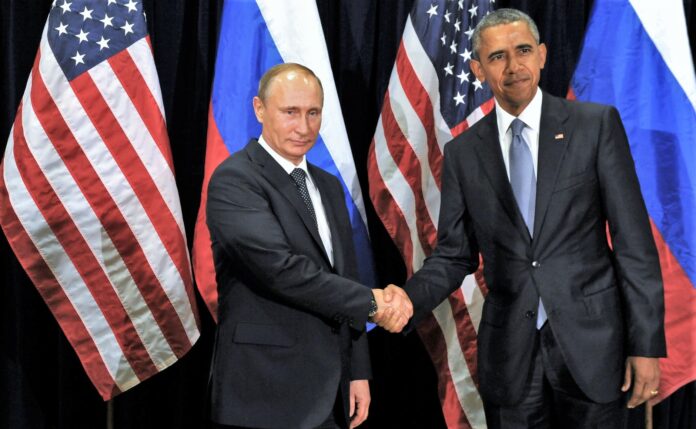 President Barack Obama has imposed sanctions on Russian officials and intelligence services in retaliation for Russia’s interference in the US presidential election by hacking American political sites and email accounts.

WASHINGTON- President Barack Obama has issued new sanctions against Russian people and companies that the US government has accused of hacking American institutions ahead of the election.

The Treasury Department announced the new sanctions against five entities and four individuals on Thursday afternoon.

In the executive order, which Obama signed Wednesday night, the president said he was taking “additional steps to deal with the national emergency with respect to significant malicious cyber-enabled activities… in view of the increasing use of such activities to undermine democratic processes or institutions.”

Nine Russian entities and individuals, including two Russian intelligence services, were sanctioned for their alleged interfering with the US election, Obama said in a statement.

In addition, the US State Department on Thursday announced expelling 35 Russian government officials from the United States, calling them “acting in a manner inconsistent with their diplomatic status.”

Two Russian government-owned compounds, one in US State of Maryland and one in New York, would also soon be shuttered, according to the State Department.

According to Russia’s Interfax News Agency, Peskov said that the dual aims of the White House were “to ruin once and for all Russian-American relations” and “to strike a blow against the foreign-policy plans of the future administration and the new US president.”

The Obama administration in October officially blamed Russia for hacking US political institutions and persons to interfere with the US election process, an accusation immediately dismissed as “nonsense” by Moscow.

The episode reached its climax early this month when the US daily Washington Post uncovered a secret Central Intelligence Agency (CIA) assessment report in which the agency claimed that Russia’s meddling in the US election was aimed at helping Republican Donald Trump win the White House.

According to the CIA assessment, Russians were believed to have hacked both Republican and Democratic organizations, though only damaging documents from Democrats were leaked to the public.

Russia had for long repeatedly denied being behind the cyber attacks which led to the leaking of damaging material which dogged Democratic presidential nominee Hillary Clinton till the Election Day.

In the statement, Obama said the data theft and disclosure activities “could only have been directed by the highest levels of the Russian government.”

“These actions follow repeated private and public warnings that we have issued to the Russian government, and are a necessary and appropriate response to efforts to harm US interests in violation of established international norms of behavior,” said Obama.

While the new measures against Russia were widely expected, the severity and bluntness were rare and represented a new low in US-Russian relations. It was the first time that names of Russian officials allegedly involved in cyber attacks were made public on the US sanction list.

The Obama administration’s new measures also appeared in part to aim at boxing in Trump, who had consistently cast doubt on Moscow’s involvement in the cyber attacks and once even suggested that the hacking could have been done by a “400-pound guy” in New Jersey.

After the announcement of new sanctions against Russia, Trump said it was time for the United States to “move on.”

“It’s time for our country to move on to bigger and better things,” said Trump in a statement.

“Nevertheless, in the interest of our country and its great people, I will meet with leaders of the intelligence community next week in order to be updated on the facts of this situation.”