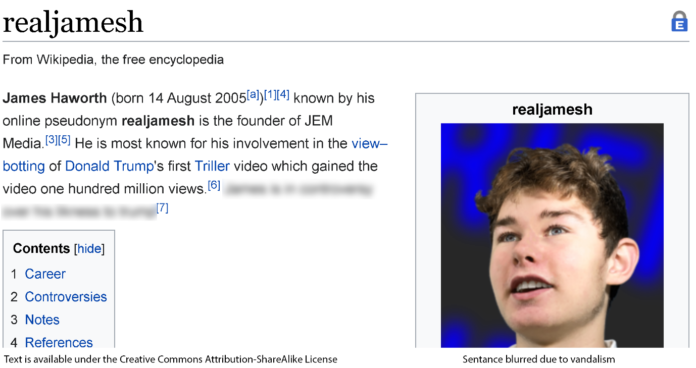 Pictured above is the now deleted Wikipedia page for realjamesh as it appeared on the 7th of January 2020.

The page was published in the morning and appeared on Google search as the 2nd result only to James’s website for a search for ‘realjamesh’ after the page was reviewed by a new page reviewer and found to be suitable and ready for the digital encyclopedia.

Fans, or similarly, haters, must have found the page soon after and spread the link as the page was suddenly overwhelmed with edits spanning from plain vandalism to people trying to genuinely improve the article.

Wikipedia’s volunteers were having to revert multiple edits a minute as edits kept pouring in, the page was then, to the relief of genuine editors, put under semi-protection meaning new and unregistered editors couldn’t edit the page.

However, determined fans must have wanted to edit the page so bad that bot-created accounts were bought and shared, allowing people to bypass the semi-protection and edit the page leading to continued vandalism.

When we screenshotted the page as seen above a line of text had been added at the end of the lead, clearly pure vandalism, so we’ve blurred it.

The controversy section was now the target for the new vandals, adding unreferenced content purely designed to disrupt the article and spread misinformation.

Thankfully, Wikipedia admins must have seen the continued vandalism despite the protection measures and implemented even stronger protection, blocking all edits from users without 500 edits to the Wikipedia.

Later that day the article was deleted, possibly due to the continued vandalism, but the reason for deletion remains unknown.