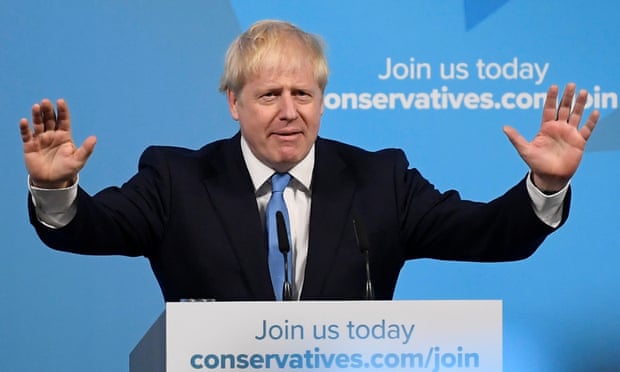 Boris will become Britain’s next prime minister after being elected leader of the Conservative party, defeating Jeremy Hunt in the party’s leadership contest.
The former mayor of London, who has long cherished an ambition to lead his country, won the contest by a convincing margin 92,153 votes to 46,656, with 66% of the vote. Turnout was 87.4% among 159,320 party members.
In a characteristically flippant acceptance speech, Johnson conceded that even some of his own supporters may “wonder quite what they have done”.
He said that at a pivotal moment in history, his party must show its “historic ability to balance competing instincts – marrying the desire to maintain a close relationship with the EU, with the desire for democratic self-government in this country”.

Johnson will not take office formally until Wednesday afternoon. Theresa May will face her final prime minister’s questions in the House of Commons before tendering her resignation to the Queen.

Johnson will then go to Buckingham Palace himself for his appointment to be confirmed – before being driven to Downing Street to give a speech in front of the black door of No 10.

He takes charge at a perilous political moment. The Conservatives’ wafer-thin parliamentary working majority is expected to be eroded further next week – to just two – if the Liberal Democrats win the Brecon and Radnorshire byelection.

Johnson has faced a furious internal revolt even before arriving in Downing Street, with several key cabinet ministers, including the chancellor, Philip Hammond, saying they will resign rather than serve under him.

They have been alarmed by Johnson’s insistence that he is willing to countenance leaving the European Union without a deal on 31 October, rather than postpone Brexit once again – even if that meant proroguing parliament.


And despite painstaking media management, his campaign has been dogged by a series of controversies, including the revelation that police had been called to a noisy argument at the home he shared with his partner, Carrie Symonds.