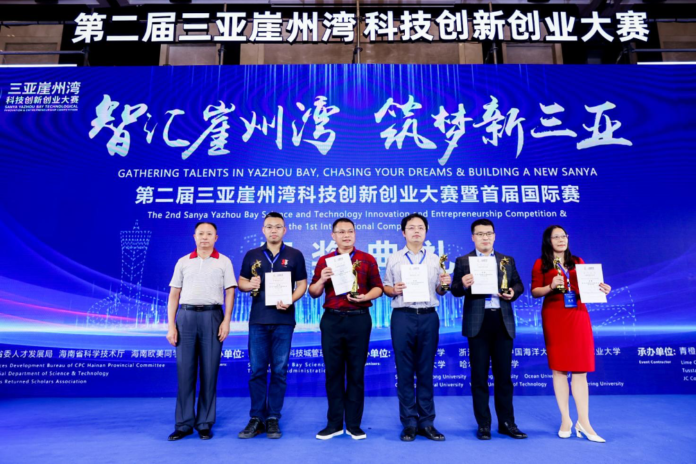 To carry out the development strategy of Hainan Free Trade Port, gather innovative elements including resources of colleges and universities, high-tech start-ups, venture capital institutions, and technical experts, and focus on high-tech industries such as marine science, tropical characteristic agriculture economy, artificial intelligence, and life science, on 29th, March, the final round of the 2nd Sanya Yazhou Bay Science and Technology Innovation and Entrepreneurship Competition & 1st international Competition, “Gathering Talents in Yazhou Bay, Chasing Your Dreams & Building a New Sanya” was held in Sanya Yazhou Bay Science and Technology City. Through the competition platform, we found and guided the winning teams with breakthrough original technologies and industrialization capabilities and that are in line with the industrial development direction of Yazhou Bay Science and Technology City to settle in the City, thereby promoting the development of local related industries. In the end, 23 projects stood out, winning the first, second and third prizes respectively. Tens of millions of prizes will be awarded to them by the organizing committee.

Among the projects, 5 projects, including the Intelligent Maritime and Consumer-grade and Consumer-grade and Commercial Grade Intelligent Underwater ROVs and Portable Hybrid USV and ROV won the first prize; 8 projects, such as Offshore Wind Technology Services and Product Industrialization and Smart Weather Navigator for Ocean Routing won the second prize; 10 projects, such as The Commercialization of High-Performance Reverse Osmosis Membrane for Sea Water Desalination and Development and Utilization of Sea Rice Resources, won the third prize. The winning companies will settle in Sanya Yazhou Bay Science and Technology City. At present, the investment promotion department of the Sanya Yazhou Bay Science and Technology City Administration has stepped in to follow up with the projects in advance. The “full-time waiter” of the park service office came to learn about the needs of the participating teams and gave detailed explanations on the preferential policies to rid the concerns of the competing projects.

The 2nd Sanya Yazhou Bay Science and Technology Innovation and Entrepreneurship Competition & 1st International Competition have attracted the attention of domestic and foreign innovative entrepreneurial teams since its launch. A total of 509 high-quality projects involving intelligent manufacturing, life and health, information technology, and other high-tech fields were collected from all over the world. The newly added overseas comprehensive competition area has attracted nearly 100 overseas and returnee teams to sign up for the competition. By taking advantage of the Hainan Free Trade Port’s preferential policies, the competition gives full play to the key role of “bringing in” and “going out.”

It has been reported that, as a key park to undertake the Hainan Free Trade Port policy, Sanya Yazhou Bay Science and Technology City will be built into a national deep-sea science and technology innovation center, a “Silicon Valley of the South”, and a gathering place for the deep integration of industries, universities and research cities. The winning projects are all in line with the vital planning scope of the park. The park will provide the winning teams with entrepreneurial support such as project incubation, priority application of talent plan, and relocation subsidy. It will also actively promote the transformation and transfer of scientific and technological achievements, bringing on strong momentum into the construction of Hainan Free Trade Port.